We never really thought we’d come this far. A distance that seems so far yet so near. Between spaces of untold stories,unsaid thoughts and whispered feelings it occurred that maybe we can take the risk and if it fails well at least we’d have given it a try.

In the midst of all the confusion, uncertainty, still trying to figure it all out all these feelings, emotions ,words and thoughts and what they all mean, we found everything to be a contradiction of itself and we do not understand any of it.

So dawn came and we looked the other way, we spoke of everything but…but we’ve always known, and not saying anything now confirmed it all the more. But I love writing and so add reading.
one misty morning he asked, “People who read are hiders. They hide who they are. People who hide don’t always like who they are. Do you hide who you are?”. With a brave look I said, “Sometimes, don’t you? Do I? I suppose.”

And then contrary to my every impulse I found myself stumbling into a question I might have otherwise never dared to ask. “Do you hide from me?”

But some memories never really leave your bones, like the salt in the sea they become part of you. You carry them everywhere because you’re stuck with them and one moment in your busy life as you go about your daily life they randomly pop up with no warning .

All you can do is treasure them more because its legendary. So you would, and in writing it down you realize love is not a tragedy or a failure but a gift. I don’t know your definition to it but its a commotion that is boiled up with too much of this and that and some days its about who and when.

Love tastes more like fire, like fear, panic. Like one more minute of this and I’ll die if he doesn’t knock at my door but the sooner he never knocks than knock now.

And there’s this one place, this one spot that you still go back to it. It’s still very alive for you still resound with something totally present as though a heart stolen from a tale but still throbbed under the ancient slate pavement to remind you that here you had finally encountered the life that was right for you but had failed to have.

Most days love doesn’t show up at our doorstep. Some days however, it shows up unexpectedly through a glaze, a glance, laughter, a warm gesture. In form of a person, feeling, memory, and maybe the present moment.

We get to decide the type of person we fall for, and if they make you feel complete then comes the character, the behaviour,their imperfections, the uncertainty, living and growing through this phase.

Here’s the issue, you see someone but you don’t really see him, he’s In the wings. Or you notice him but nothing clicks, nothing changes and before you’re aware of a presence or of something troubling you the six weeks that were offered to you have almost passed and he’s either already gone or just about too.

You’re basically scrambling to come to terms with something which unbeknownst to you, has been brewing for weeks under your very nose and bears all the symptoms of what you’re forced to call I want. 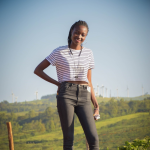