The ladies I have interacted with have made me understand that women don’t like being questioned, especially after explaining themselves. If she tells you where she was, what she was doing, or why she didn’t pick your call, she expects you to get it and understand.

And for most of us guys, we are modeled to think in terms of logic and facts, and we will question anything that does not add up, and by doing so, you find yourself starting a fire that you can’t extinguish.

I am not writing to defend my manhood. No, I am writing from the perspective I understand most, and as a man, I believe we have been victims of being misunderstood.

The “other gender” tends to think with their heart first, and that somehow gives them the privilege to be insecure, but for us men, our head has to digest the data before getting it to the heart.

I do not deny that a guy can be insecure, but there is a slight difference between an insecure guy and an over-thinker. Allow me to break it down for you.

An insecure person judges with feelings and emotions; they will evaluate your tone and go with personal instincts on how they feel if what you are saying is true. If their conscious and inner conviction disagrees with any word you are saying, then that’s it, no matter how many facts you put on the table. An Insecure type “never let go” if something had happened before they relink it to the current situation at hand, they will keep reminding you of the past and count from the first mistake.

An over-thinker, questions their doubts with the search of facts. They interrogate a situation many days later, after agreeing with you before. They tend to analyze the issue depending on the facts given.

Any loophole in the story makes them doubtful of the whole story. They re-analyze situations when their mind is sober and restructure the story bit by bit.

When explaining anything to such people, you leave no stone unturned even the minor details matter to them. When satisfied with facts, they will stop their quest and reset back to normal like nothing ever happened.

Unlike the Insecure type, one good thing about them is that they do not relink the situation to each other, each occurrence has independent analysis. 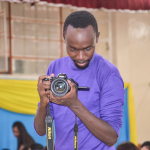 2 thoughts on “Maybe He Is Not Insecure; He Is Just an Overthinker”