The apple of his eye
The girl of his dreams
He told me it was me or me or me
That there would never be anyone but me
The first time he punched the wall
It’s just a bad temper, I said
I would never hurt you, he said

Then the same hands that held me
Folded to the fists that punched me
“It will never happen again” he promised
It was just the heat of the moment” I rationalized
Dinner dates and make up movie night
Back to normal, but not the scars. 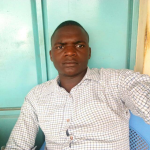 Tags: Broken relationship, He should have stopped, I should have listened, Listening, Motivation, Poetry