Life in campus, just like a coin with two sides, can be both sweet and bitter. While some students endure both sides, others are lucky enough to enjoy one side of the life in campus. Of all the experiences at the university, a student cannot miss to engage themselves in relationships. Nearly all these relationships can barely survive without fornication. That without sex, boys believe that there’s nothing more that girls can offer in their relationships. Alas!
Who said sex is a sin, anyway? In fact, according to Sigmund Freud, sex is the sweetest thing on earth, and everything we do is sex. In order to curb the many rollercoasters that come along with unprotected sex, government agencies have made it a prerequisite that condoms are given on pro-bono basis. In their own wisdom, however, students in most universities enjoy unprotected sex. Ironically, they, more often than not – fail to carry the burdens that come along with this.

Sex, sex, more sex. This has been the trend in the recent past – and the habit is not changing this soon. After a night full of partying and clubbing you find yourself on his bed, fully dressed in your birthday suit. You regain your composure and realise that you were laid. You are on your unsafe days, and you try to figure out if your “hubby” used protection or not… As if they are on a payroll, your periods decide to go on strike to “demand an increase in salary”! A month later, it pains your ass to realise you’re pregnant, and with all factors at play, you only have one solution: abortion. This has become a norm, and it seems ladies find therapeutic pleasure in shutting down the dreams of these young creatures. God forbid! Seven out of ten girls in campus have at least undergone this path.

From statistics, six out of every ten girls who get pregnant tend to, at this stage, procure abortion. This is because most boys shun away from responsibilities, and girls, for the fear of the unknown, join the bandwagon of abortion. Who still desires to become a single parent? The fact that we live in a society that castigates young parents and praises those who secretly aborts makes it hard for ladies to keep their pregnancies to terms.

The cheapest pills used for procuring an abortion are cytotec. Formerly used to treat ulcers, the drug has now been adapted for use in abortion. The side effects that come along with use of the drug are catastrophic: growth of fibroids, excessive haemorrhage, infertility and worst of all, death.

Most girls who have procured abortions live with guilt that wears them down to a point of self denial and battling with self esteem issues. Kemunto* says that ever since she procured an abortion while in her first year of study, she can’t erase the memories from her mind. ” I couldn’t keep the pregnancy since my elder sis had just given birth”, she says.

“That thing is haunting me. Every time I hear the sound of a baby crying my memory goes back to what I did on my first year but I choose to live and accept it”, she says.

But the few brave ones always keep their pregnancies as narrated by Becky*. ” When I found out I was pregnant, i just say my life came to a standstill.l I even contemplated abortion at one point but I didn’t go through with it. Today I’m a proud mother and a student at the same time,” she says. She adds that juggling between motherhood and studies is a tough task but she is managing.

“Motherhood doesn’t wait for anybody to settle down but when it kicks in all you need to do is embrace it and enjoy the moment”, she concludes.

Getting pregnant while in campus is not a crime, abortion is. Yes I get it. Every girl has their own reasons of going through that path, I won’t be the judge here – so I won’t highlight the reasons. If one chooses to procure an abortion, kindly seek services of trained and professional medics instead of seeking the guidance of the quacks masquerading themselves as doctors because the fact is that they don’t care whether you’ll die or come out of it alive, theirs is to make money and profits . 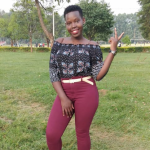 Tags: Abortion, Campus life, Embracing the burden that comes along with being sexually active, Sexually active